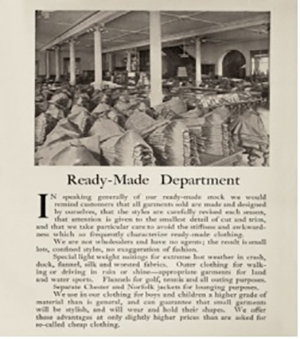 You’d be easily forgiven for thinking today’s off-the-rack suits owe their origin to the urban-dwelling businessman. But would you believe they owe more to pioneers than to aristocrats?

As with most American tales involving discovery, this particular story was written in the west.
On January 24, 1848, a man named James Marshall struck gold in California. By August of that year, word reached New York City and gold fever gripped the nation. As men set out for California in droves, the Brooks brothers—the four sons of founder Henry Sands Brooks—saw an opportunity to meet the needs of the westward-bound, and they forever altered the way Americans approached the buying of clothing.

In the year that followed, Brooks Brothers began advertising ready-made suits “for the California trade,” making it easy for those heading west—who were called “Argonauts” in newspapers of the time—to outfit themselves in full suits of clothing without needing to endure the time-consuming process of being fitted multiple times by a tailor. The ready-made Brooks Brothers suit was a turning point for the garment industry and for the American population, making fine clothing more accessible to all. And while not all pioneers struck gold, Brooks certainly did—with this innovation that represents our biggest contribution to American fashion.